After Mumbai in April and May, Delhi in June, it is now Chennai which is witnessing the highest number of new Covid-19 cases every day, and the fastest growth in cases among the worst affected cities. On June 30, Chennai had almost 2,400 new cases – the highest in India, and second highest in the world after Los Angeles.

Delhi, which has the highest number of cases among Indian cities, recorded 2,200 new cases on the same day.

After recording its first case on March 18, Chennai, India’s sixth-largest city in terms of population, has had a consistently high number of cases. Driven in the early days by incoming international travelers, as in other states, Tamil Nadu’s epidemic hit its first surge with a Tablighi Jamaat-linked cluster in early April that the state said led to over 1,200 cases, which were traced and isolated. After appearing to have the spread of the pandemic under control, Tamil Nadu, and Chennai in particular, had another crisis in the even bigger Koyambedu cluster. In May, a bungled decision over relocating a major wholesale vegetable market led to traders and vendors having to spend several days and nights inside the market, who then went on to travel to adjoining districts, spreading the virus in smaller clusters wherever they went.

But the state has consistently tested at a high rate, been visible on the ground and relatively open with data and information. Yet, the numbers are now spiraling.

On June 30, Chennai had the highest number of new cases for any city in India for the second straight day, beating Delhi, and Mumbai, which now has substantially fewer new cases after surging through all of May. Since June 3, Chennai has been reporting over 1,000 new cases every day, and for the last two days of June, it reported over 2,000 new cases, comparable to Delhi, despite having less than half its population.

Chennai has seen rapidly surging numbers in the last two weeks, despite being under “intensified lockdown” since June 14 along with three other districts, and public transport, people’s movement and grocery store timings once again severely curtailed. The lockdown has now been extended till July 5, and even after that, the city is not ready to “unlock”, officials have warned.

The doubling time of cases, i.e. the number of days needed for total cases to double, grew steadily through June, but since June 21, the trend was reversed. Cases are now growing fastest in Chennai among the three most affected cities, doubling every 17 days. In Delhi, cases are doubling every 18 days, while in Mumbai, it is 41 days. 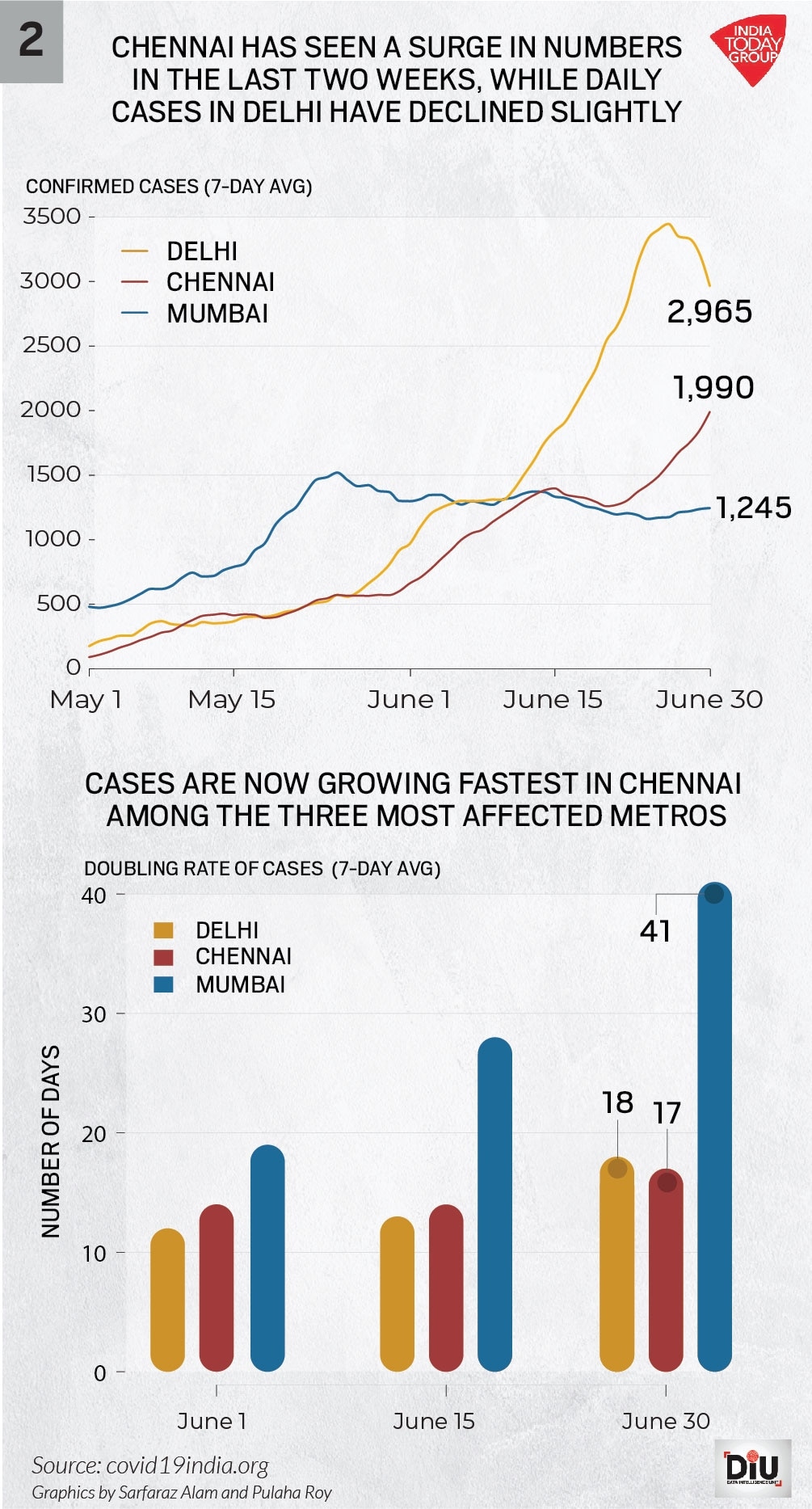 While testing data for Chennai is not available separately, Tamil Nadu as a whole has ramped up testing considerably. Over June, it has doubled its tests, and having conducted over 1 million tests so far, has tested more than any other state. But growing test positivity rates suggest that it isn’t testing alone that explains the high numbers, and infections are surging too, faster than testing can keep up with.

At the beginning of June, Tamil Nadu had a TPR of less than 5 per cent, but by the end of the month, it went up to almost 8 per cent.

PwCA to call it quits as GVKPIL auditors, allege non-cooperation by company & management