Over the last week, Karnataka has registered an unusual spike in Covid-19 cases. Given the fact that it is a large urbanised state with high migration, the growth in numbers was expected. But can the state keep up?

Karnataka now has more than 18,000 confirmed cases of Covid-19. Between June 28 and July 2, it recorded over 1,000 new cases almost every day, and on Thursday, this number shot up to over 1,500 – the largest single-day rise in new cases for any state after the three worst affected states of Maharashtra, Tamil Nadu and Delhi.

Cases are now doubling faster in Karnataka than any Indian state. In Karnataka, cases are doubling in less than nine days against the national average of almost 20 days.

This is a worrying sign for a state that has prided itself on contact tracing, because when cases increase this fast, contact tracing usually falls behind. By the end of April, Karnataka had traced more contacts per confirmed case than any other state in the country. But in the 30 days of June, it could trace just one primary contact per 10 confirmed cases in Bengaluru city on an average. 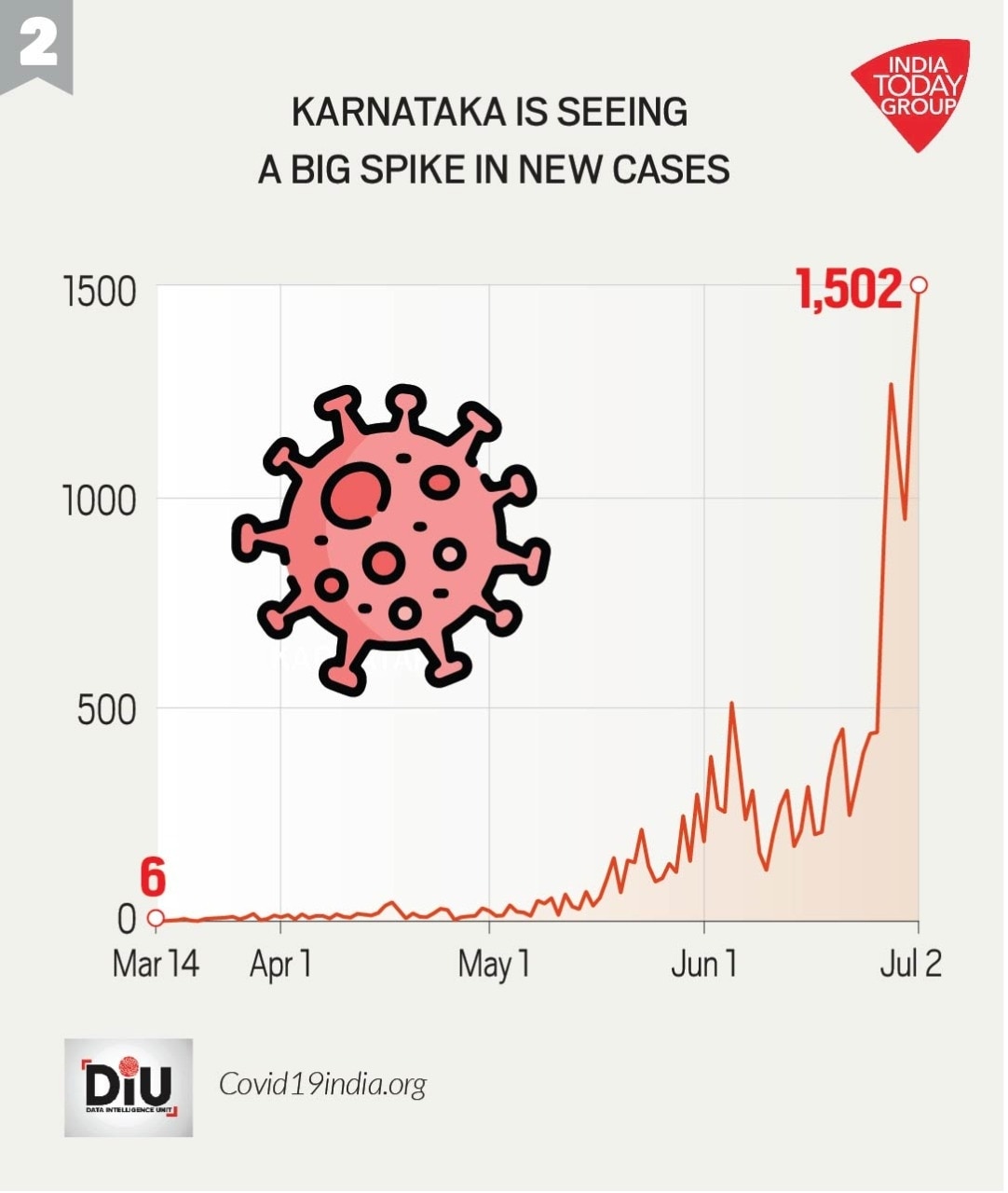 Moreover, while the state was able to assiduously trace the source of transmission for most cases until now, and found that the majority of cases came from domestic travel, this is now changing.

On June 28, the last date for which this data is available, 192 of the 1,267 cases discovered on that day could be contact-traced to a confirmed case, and a further 100 to travelers coming in from hotspot states. The source of transmission for the majority – 837 cases – was either not identified or not disclosed by Friday.

Karnataka’s cases are heavily concentrated in the capital Bengaluru. On July 2, Bengaluru reported almost 900 new cases, the seventh highest for any Indian city. Shanthala Nagar, Singasandra and Jayanagar reported the highest number of new cases within the city, while Padarayanapura, Visveswarapuram and Dharmaraya Swamy Nagar areas have the most cases in all.

Bengaluru’s cumulative case count is almost 6,200. Just last week, its daily additions were much lower, but that appears to be a reporting glitch. Municipal commissioner Anil Kumar had said that the Covid-19 war room set up by the state government flagged unreported positive cases which the corporation then added in batches between June 27 and 30. 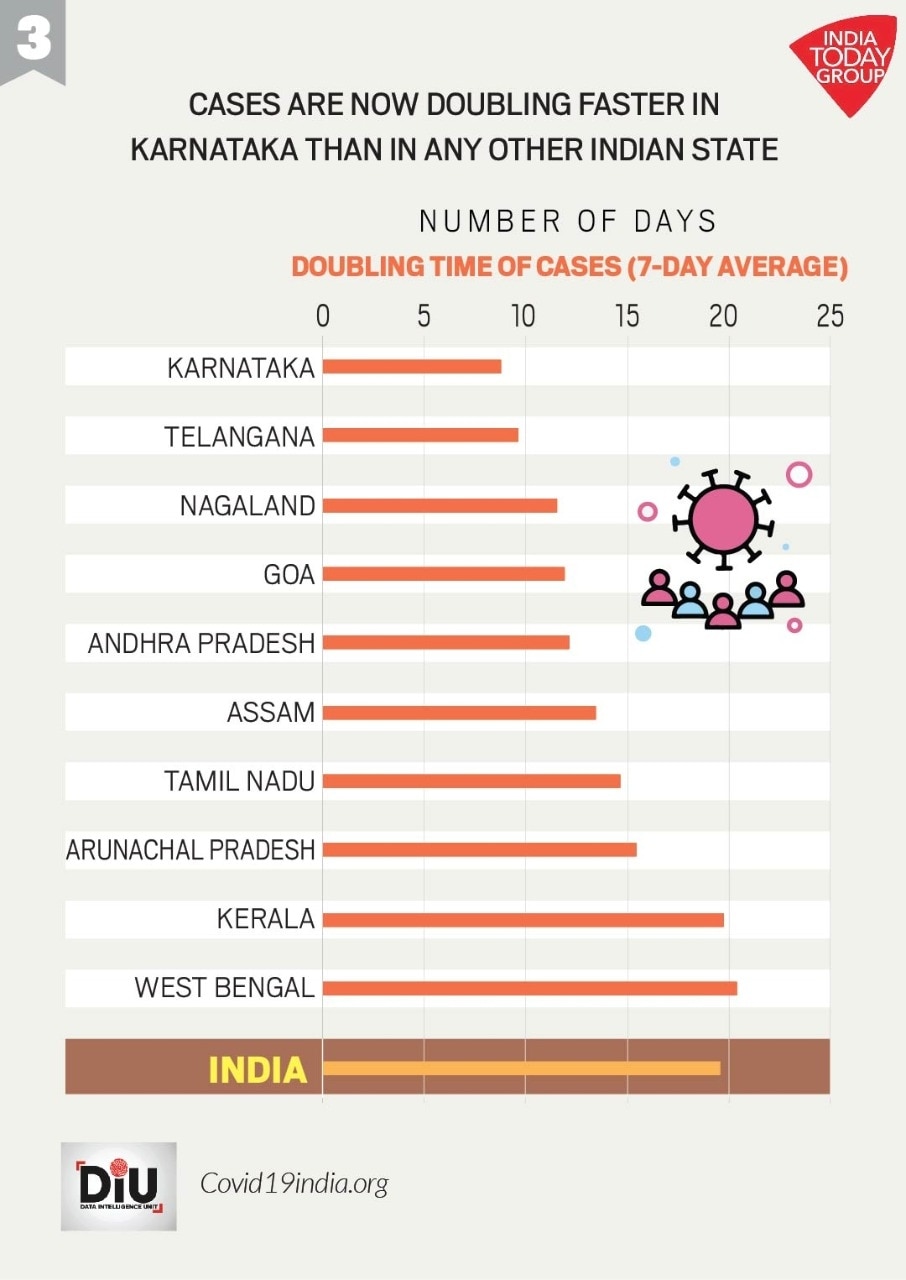 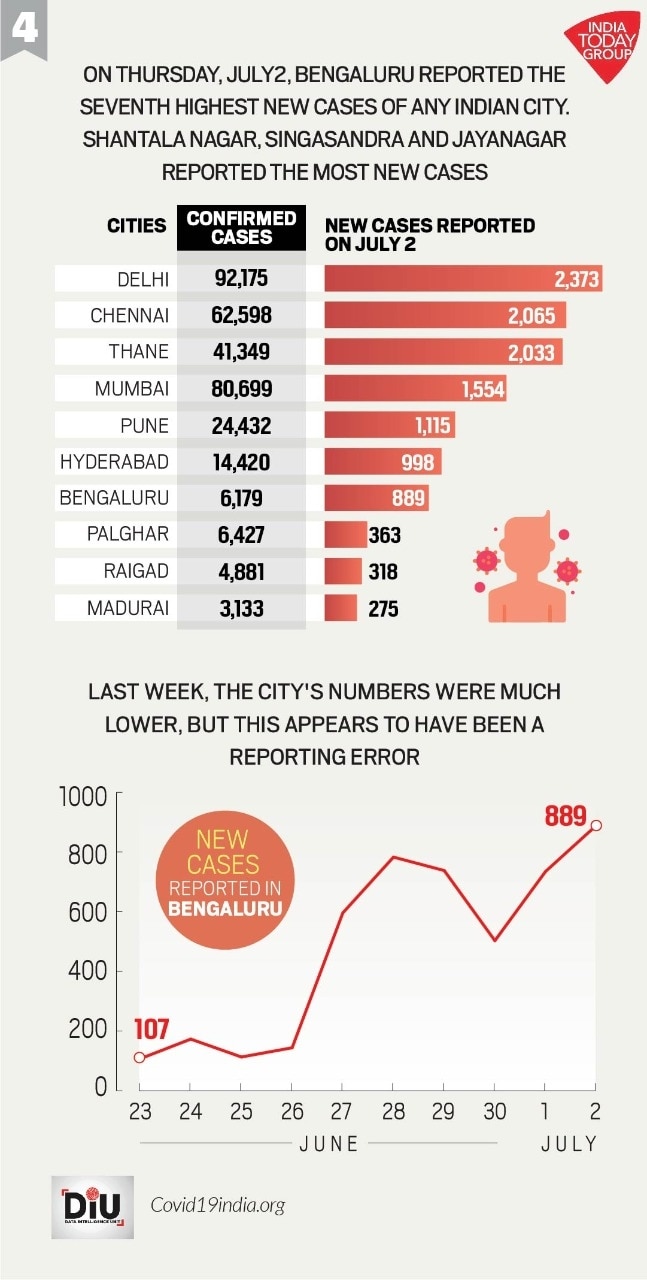 In all, over 1,200 older cases were added in just four days. The commissioner has attributed the spike in cases to easing the lockdown. At present, Karnataka has a test positivity rate of 2.76 per cent. It has conducted more than 6.5 lakh tests, or a little less than 10,000 tests per million population.