A picture has gone viral on social media which shows Dr VK Srinivas, vice president of Bharat Biotech, taking the first dose of coronavirus vaccine “Covaxin” developed by his team, as part of human trial.

This picture is circulating on social media with the claim that the first dose of the vaccine was administered on BBIL vice-president VK Srinivas. (Photo: Twitter)

There are news reports that the Indian Council of Medical Research (ICMR) and Bharat Biotech International Limited (BBIL) could launch an indigenous anti-Covid vaccine called “Covaxin” by August 15 for the public.

Meanwhile, a picture of a woman in medical gear thrusting a syringe in a man’s veins is circulating on social media with the claim that the first dose of the vaccine was administered on BBIL vice president VK Srinivas as part of human trial.

Several Twitter and Facebook users have posted the image with the caption, “Dr V. K.Srinivas,Vice President, Bharat biotech, taking Corona vaccine… Clinical trial immediately after taking the first dose he said that he is the first person in India to take vaccine developed by him and his team in Bharat Biotech Look at the confidence that they have in their product.”

The message is also circulating on WhatsApp. 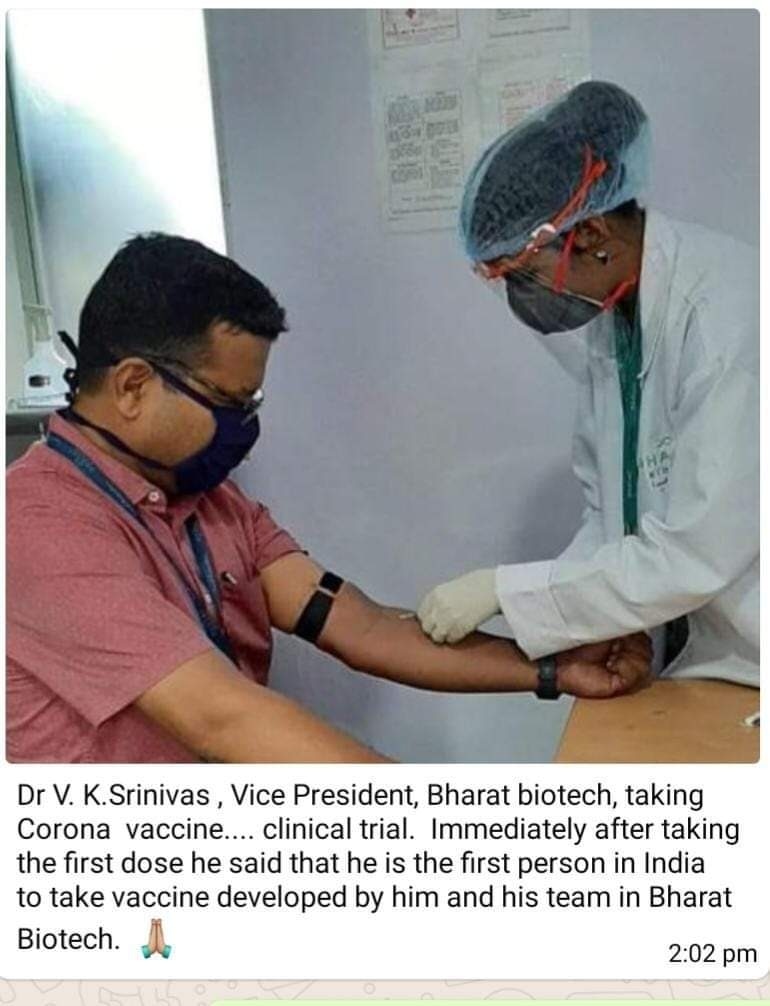 India Today Anti Fake News War Room (AFWA) has found the claim to be misleading. Bharat Biotech has denied that the image is of clinical trials of its Covid-19 vaccine. The viral picture is of “routine procedural blood draw for testing all production staff”, it said.

The archived versions of the posts can be seen here and here. The image with the same claim has been shared by many on Twitter and Facebook.

Soon after the image went viral, Bharat Biotech tweeted, refuting the claim. Part of its rebuttal says, “Certain images and messages being circulated on WhatsApp and other social media platforms have NOT been disseminated by Bharat Biotech. The image being circulated is a routine procedural blood draw for testing all production staff.”

On July 1, news channel “NDTV” had tweeted an interview of Dr Krishna Ella, chairman and MD of Bharat Biotech, where he said that human trials should start in 10 days.

Hence, it can be concluded that the viral claim of Bharat Biotech V-P Dr VK Srinivas taking the first dose of anti-Covid vaccine “Covaxin” as human trial is misleading. The picture is of routine procedural blood draw for testing all production staff. ClaimPicture shows Dr VK Srinivas, vice-president of Bharat Biotech, taking the first dose of coronavirus vaccine “Covaxin” developed by his team, as part of human trial.ConclusionBharat Biotech has refuted the claims and called it a “routine procedural blood draw for testing all production staff”.